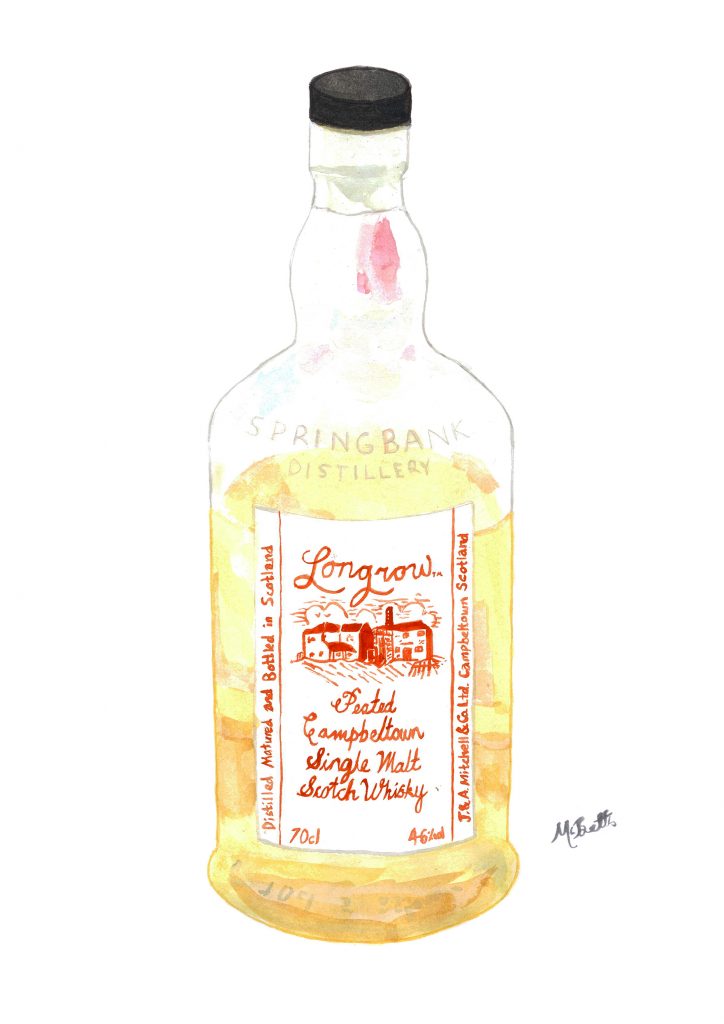 I suspect this is largely informed by my current progression through the Wheel of Time series*, but the Longrow Peated (NAS) reminds me of a youthful farmboy who yearns for big adventure. Our story begins on a quaint little coastal farm with puffing chimney, where honest labour yields honest rewards…

The opening aromas are all about utility: fresh cut grass, haybales and livestock; leathery tannins, curing salts, and peated fires. These are damp, heavy smells, though all things considered, the nose itself is fainter than you might imagine – like a heavy spring rain?

The taste carries on in this vein – at first it’s subtle – a light peat, more prominent salted peanuts and a suggestion of sugar-coated almonds. It’s pleasant, if a little anaemic, and in the quiet, there’s the feeling that there’s probably something more than this…

And so as the seconds tick by, all of a sudden the Longrow Peated ignites in a fit of youthful exuberance! Heat and smoke radiate out from the tip of the tongue, sending a blast of peat over the tastebuds. That evolves richly: peanut brittle and salty dark fudge, which gives way to a somewhat lingering black sausage finish – a taste of salt and iron, with a smouldering, smokey, earthy sensation.

Surprisingly though, despite its appearance of heft, the Longrow Peated is not a heavy-oily whisky. Throughout its journey it mostly sits at the front of the mouth on the tip of the tongue, rather than the back. Whereas other heavily peated whiskies travel all the way down your throat and radiate out from your chest, this one, peculiarly, never really ventures beyond your tonsils.  The result is a surprisingly fresh, youthful show of strength, a bold and energetic peat, unlike some of its more grounded island cousins.

I think this is a gem of a whisky. Like other Campbeltowns it’s a little harder to come by than some, but it’s not too expensive, and it’s interesting, dammnit. If I could get my hands on this more readily, I could very easily see it sitting on my shelf in regular rotation.

Drink if you like: The Wheel of Time, Raymond E. Feist, Middle Earth, Belgarion…

Avoid if you like: age statements, iDevices, Warhammer 40:000 – Eldar

*Substitute with just about any fantasy novel series

"Look, Miss Snit, a girl does not get anywhere by acting intelligent! I mean, take a look at you and me. You chose books - I chose looks."
- Zinnia Wormwood, Matilda