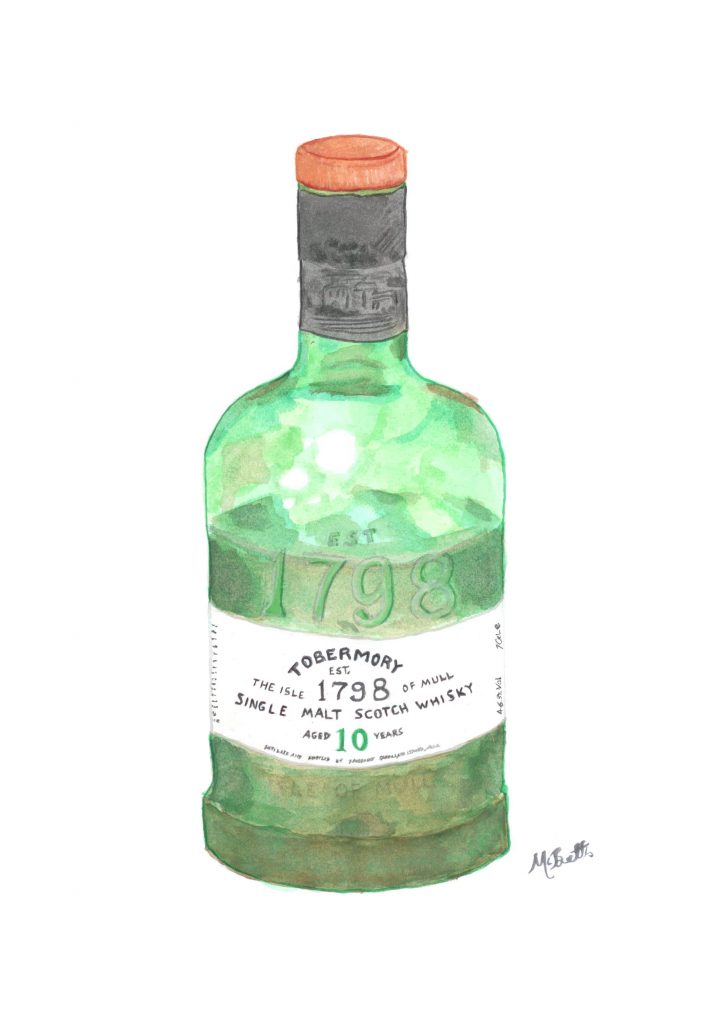 As I come to write my first less-than-glowing review, it’s worth repeating something we’re all supposed to know: whisky tasting is a personal experience. One man or woman’s divine ambrosia is another’s vatted cat piss. While down in the dark corners of my personality I might struggle to dislodge the notion that, no – that’s just lip service, and of course I’m right and they’re wrong – I should at least acknowledge that I don’t speak for everyone here. I know there are people who love the Tobermory 10. Conversely, I also know there are people who detest it. While I don’t really feel strongly enough about it to howl at the heavens and curse its name, it’s fair to say this is not one of my favourites. And, let’s be honest, my favourites list ain’t that exclusive.

There are things to like about the nose, with sweet, fruity notes on the surface: bananas, apricots and cherries. There is, however, a slight taint to it. The cherries are slightly too ripe, and there’s a tart soap with a hint of salt. It’s not overly harmonious.

The palette has promise too: it’s ripe and fruity, almost rum-like in its sugary heft. It’s a jungle jam – kind of reminds me of Donkey Kong. It’s also bitter and slightly offputting – just like Donkey Kong. The Tobermory 10 is strongly spiced with clove, it’s salty, and there are also some mealy, biscuity flavours kicking about. That’s not so much DK.

Unfortunately, its redeeming qualities fall apart on the finish. Any sweetness is overwhelmed as the ape goes on a fiery rampage. A heavy, peppery taste takes over, and doesn’t really mellow to something nicer. The experience is akin to drinking orange juice after brushing your teeth.

Maybe it’s just the way my tastebuds are configured, but it’s not working for me. Donkey Kong Country was a revelation. However, as the franchise expanded, you came to realise DK himself was one of the least-appealing characters in the line-up. Maybe you love the Tobermory 10. I don’t. I won’t write it off completely, and I may give it another go some time down the track. However, like Donkey Kong Country 64, it’s not something I’m keen to return to at this point.

Drink it if you like:
Fisherman’s Friends after a fruity rum cocktail; Donkey Kong Country 64; the flavour profile of Jura whiskies; drinks from the same town as one of the best seafood meals I’ve ever had, the Café Fish, Tobermory