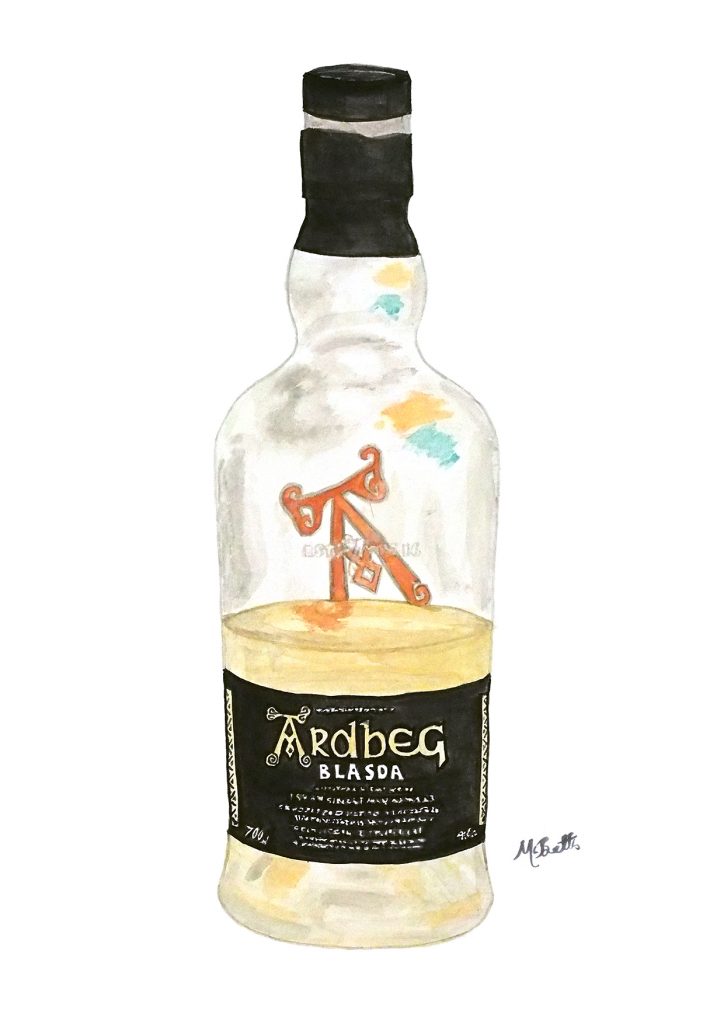 Blasda’s got a range of flavours, textures and colours, but it’s also one very slick enterprise, and perhaps feels a little clean and self-consciously showy**.

The Blasda was a (relatively) limited expression, in which Arbeg experimented by trading in their peat monster hat for a peat puppy*. Instead of Ardbeg’s usual 24 parts per million of peat (ppm), it was bottled at only 8ppm.

The result is still peaty, but it’s got a fresh, open sensibility to it.

The nose is a fairly light affair, featuring fruity and organic notes. There’s grape and orange mixed with hay and wool, and a sprinkling of salt adds an extra dimension. It’s subtle, overall.

The taste moves into a mid-sweetness – peanut brittle and iced coffee. Well, double soy mocha frappé. A line of peat sits underneath that, and on top, there’s a slightly metallic edge to it, coppery, like you’ve licked a coin***.

There’s a flash of mouth warmth and char on the finish, but it’s all smoke, no fire. It feels like there’s something missing at the end – not unlike, perhaps, William Thacker trying to move on with his life, but lacking the reciprocated love of the world’s most desirable movie star?

It’s a nice whisky, it’s an interesting whisky, and one I’m glad I had the opportunity to try. However, just as a single, cleverly orchestrated scene does not a classic rom-com make, a whisky lacking a finish makes not for a lasting single malt. Ardbegs are rightly regarded as some of the best whiskies in the world, but this doesn’t quite reach the status of their best feature presentations.

PS. Special thanks to Adrian Gray for lending me his bottle, and for not grumbling too much when I give it back sans a couple o’ drams.

Try it if you like: Ardbeg, but, like, not how peaty it is (I don’t know, does someone like that exist?); sourcing produce that’s, like, ‘so real’, while wearing a cashmere scarf and buying single-origin scented candles.

Don’t try it if you like: true love; dreamily sitting on benches while Elvis Costello croons over a lifting crane shot.

*OMG that sounds adorable.
**Which is great in the movie. I love that scene. I love that movie. All guys love that movie. If a guy tells you he doesn’t love that movie, he’s either lying to you, or lying to himself.
***What’s with the lying? You know you know what a copper coin tastes like. Unless you were born in Australia after 1990 – we got rid of our 1c and 2c coins, and now we’re gunning for the 5c. Horrible, useless, infuriating things, those small currencies. Unless you’re licking them.

"Look, Miss Snit, a girl does not get anywhere by acting intelligent! I mean, take a look at you and me. You chose books - I chose looks."
- Zinnia Wormwood, Matilda